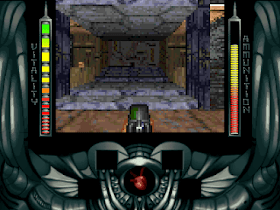 Genre: Action, FPS
Perspective: 1st-person
Gameplay: Shooter
Setting: Sci-fi / futuristic
Published by: Team17 Software Limited
Developed by: Team17 Software Limited
Released: 1995
Platform: Amiga
DOOM on the Amiga is the dream of all Amiga gamers of the mid-1990s, who had to quietly stand aside when their PC friends excitedly discussed the extermination of demons in the first two parts of this famous epic. Of course, the developers quickly felt the desire of the public, and DOOM clones on the Amiga were not long in coming; one of the first here was the large British company Team 17, known for games about aliens Alien Breed. They decided to use the existing franchise and make a 3D shooter based on it, which became one of the most popular on the Amiga.
If you look at the game now, it is likely to be a big disappointment: a small window displaying the view from the eyes with huge smeared pixels is, unfortunately, an inevitable consequence of the technical limitations of the platform, which was perfectly adapted to displaying flat graphics with several layers and had great opportunities for copying and creating effects when working with sprites thanks to additional coprocessors, but with great difficulty rendering graphics pixel by pixel, which required writing and optimizing a special algorithm for converting pixels into a planar representation. The result - most of the 3D-shooters for the Amiga, which themselves can be counted on the fingers, either require good hardware (accelerators for regular regular Amigas) or will come with brakes or in a small window. However, Alien Breed 3D even among them looks very faded: we must pay tribute, the continuation of the game, Alien Breed 3D II, as well as other analogues, for example - Citadel, Fears, Breathless and even the port of DOOM II itself, released on the Amiga in 1998, look much more attractive. But at the time of release, no one paid attention to this: the joy of exterminating aliens, strongly reminiscent of demons from DOOM (almost exact copies of Demon and Pain Elemental are available), covered all the shortcomings.
The levels are small, but fully 3D, with lots of stairs, balconies in the walls from which enemies shoot, holes in the ground, including those filled with water, and so on. Unfortunately, vertical aiming is not implemented, that is, if you shoot forward, it is quite possible to hit an enemy that is running somewhere below and is displayed at the bottom of the screen (or, conversely, from above). The main disadvantage for me personally is that there is no mouse control, only from the keyboard, which, apparently, is the reason for the previous limitation. In addition, there are no image quality settings and there are quite a few options in general, only changing the control keys.
Access to levels - without saves and loads, only with a password. Music only plays in the intro. Weapons are almost like in DOOM: standard pistol, shotgun, machine gun... It is possible to play together over the network.
In general, the game is not bad, but when compared with DOOM or even other analogues, it loses a lot to them, although, nevertheless, it also has good reviews on a number of Amiga sites. So fans of 3D shooters should play and evaluate the game on their own. 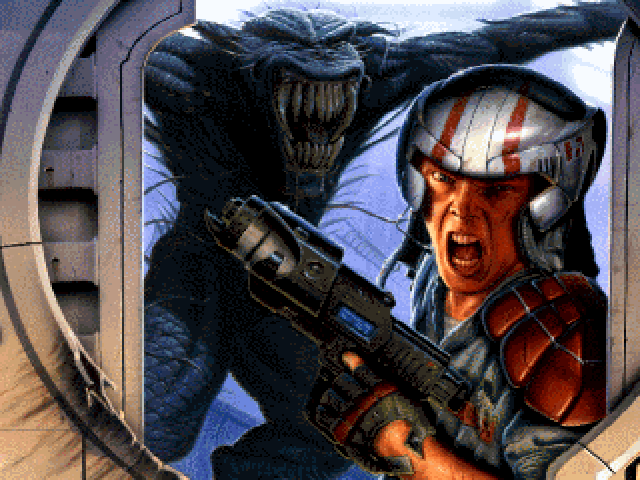