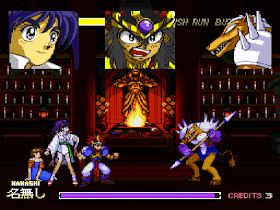 Genre: Action
Art: Anime / Manga
Gameplay: Beat 'em up / brawler, Fighting, Platform
Published by: Hudson Soft Company
Developed by: Hudson Soft Company
Released: 1995
Platform: NEC PC-FX
Long ago, Priest Enno slew the demon lord Zenki and sealed him in a magical bracelet that the priest's family has kept for generations. After many centuries, demons began to appear in modern Japan, worshiping an evil goddess and began to sow chaos and destruction. Enno's descendant, a young girl named Chiaki, has no choice but to use the bracelet and summon Zenki. But after centuries spent in a sealed state, this demon has turned into a capricious, greedy boy and Chiaki will have to put in a lot of effort to fight on her side.
Vajra Fight in terms of genre resembles a kind of beatmap in the style of Final Fight and others similar to it. You can choose Zeneki or Chiaki for the passage. There is only one task - to destroy all opponents on the screen and move on. Zenki uses his fists in combat, while Chiaki uses energy balls that can deal damage from a distance. She can also use the power of the bracelet and summon Zenki to deal massive damage. There are also special combined attacks. There are many boss fights in the game, some stages even consist of a large-scale battle with one of them.
‹
›
Home
View web version