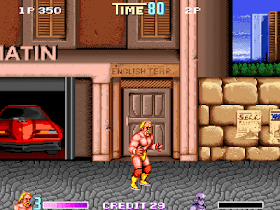 Genre: Action
Perspective: Side view
Visual: 2D scrolling
Art: Anime / Manga
Gameplay: Arcade, Beat 'em up / brawler
Interface: Direct control
Published by: magggas
Developed by: magggas
Released: 2017
Platform: OpenBOR
Double Dragon Reloaded - Alternate is a mix of the first two games in the Double Dragon saga. In addition to all the original characters, this version includes a whole roster of new ones, including wrestling legends such as Andre the Giant and Hulk Hogan.
Just like the original Double Dragons, the new Double Dragon Reloaded - Alternate is designed to be played in co-op mode with a friend, although it can also be played in single player mode. In addition, users can change the controls through the settings menu so that both players can play on the same keyboard.
This game offers a wide variety of attacks, including punching, kicking, grappling, using weapons, and more. Use all this great variety of attacks to attack enemies that get in your way, but keep in mind that the enemy in this version is armed with special weapons.
Unlike earlier versions, Double Dragon Reloaded - Alternate features five different game modes. In one of them, you even have to track down André the Giant after he crashes your motorcycle and flees the scene of the crime.
Double Dragon Reloaded - Alternate is a highly entertaining beat 'em up game that stays true to the spirit of the original arcade games.
‹
›
Home
View web version