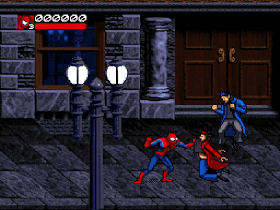 Genre: Action
Perspective: Side view
Visual: 2D scrolling
Gameplay: Beat 'em up / brawler
Published by: Acclaim Entertainment
Developed by: Software Creations Ltd.
Released: 1995
Platforms: Super Nintendo (SNES), SEGA Genesis / Mega Drive
This is the sequel to Maximum Carnage. The differences from the first part are small. First, there was a mode for two players. Secondly, the graphics of the game have changed a little (in my opinion, it has become a little worse). Other than that, it's practically the same game. We run forward and beat everyone to the right and left. At the end of the level, do the same with the boss. Repeat until fully cooked (or until you get bored). If you didn't play the first part just because you could only play it solo, play this one, you won't regret it.
‹
›
Home
View web version