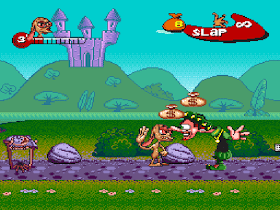 Genre: Action
Perspective: Side view
Visual: 2D scrolling
Gameplay: Shooter
Published by: THQ Inc.
Developed by: Absolute Entertainment
Released: 1995
Platform: Super Nintendo (SNES)
The game is not without humor. In fact, this is an ordinary walker, but made fun and with jokes, so it's nice to play. Your hero moves forward, eliminating stupid enemies with stupid weapons. In addition to slaps, enemies are destroyed by melons, chickens and other "deadly" things. All in all, a show is a show. True, the enemies are also on the alert, shelling the hero with their reserves. Single player game for everyone.
‹
›
Home
View web version