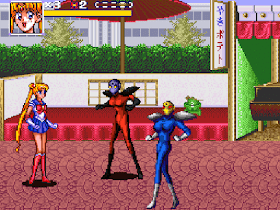 Genre: Action
Perspective: Side view
Visual: 2D scrolling
Gameplay: Arcade, Beat 'em up / brawler
Setting: Fantasy, Sci-fi / futuristic
Published by: Bandai Co.
Developed by: Angel
Released: 1993
Platform: Super Nintendo (SNES)
Again, Beat-Em-up about the Tsukino Usagi, better known as Sailor Moon and the continuation of the fighting adventures of other warriors in sailors. The main character and her friends must again stop the hordes of hostile invaders. With their demonic forces, carrying fear and destruction throughout the city of Tokyo and its civilian population. The fighting skills of heroines have increased compared to the first part. Even more powerful magic was added to long legs and magical spells, destroying all enemies in the visibility field, but with a limited margin. Also, every girl owns a throw in the air, which also adds variety to the fighting. The game is again clearly made for fans of the series of the same name. Despite her little innovations, some clumsy in the blows is still observed, as in the first part. There are no speakers in it, but playing for popular girls is still nice. Five girls will again converge cuffs on the ugly faces of enemies. Well, the numerous terrible monsters of such girls can not be gained by force. It is recommended to all fans of Sailor Moon and its friends.
‹
›
Home
View web version