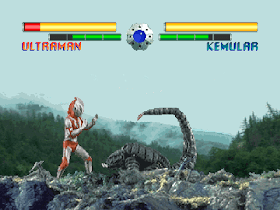 Genre: Action
Perspective: 3rd-person, Side view
Gameplay: Fighting
Setting: Sci-fi / futuristic
Published by: Bandai Co.
Developed by: Tose Co.
Released: 1994
Platform: 3DO Interactive Multiplayer
The Ultraman Powered game is based on the TV series of the same name and comics for the 3DO console. In the game, we have to deal with various huge monsters, firing at them from the air in pseudo 3D, and fighting them like in a fighting game, with a side view. We have to fight with seven monsters of huge size, each of which will have their own techniques. The game has videos that bring us up to date.
‹
›
Home
View web version