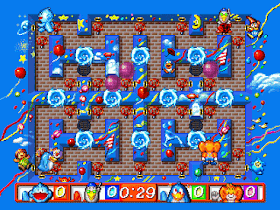 Genre: Action
Perspective: Top-down
Visual: Fixed / flip-screen
Art: Anime / Manga
Gameplay: Arcade
Interface: Direct control
Narrative: Comedy
Published by: Sanyo Electric Co.
Developed by: Sanyo Electric Co.
Released: 1995
Platform: 3DO Interactive Multiplayer
Taiketsu! Rooms is a fun Japanese arcade game that's kind of like a mixture of Bomberman and Pac-man games. Four players take part on the playing field, trying to flush each other with a stream of water into the sewer, for this you need to turn the tap valves. At the same time, bonuses and various obstacles are also scattered throughout the level. The winner is the one who last remains on the playing field. In the passage mode, you have to play in five different locations, at the end of each of them you will meet with a boss. But more this game is intended for a fun pastime of small companies of four people. This is one of the few games that support more than 2 players.
Interestingly, the cutscenes for the game are made of plasticine, which looks very nice.
The game is also known by other names: Confrontation: Wax Water (CWW), Tanjo Pure, Taiketsu Rumizu, Taiketsu! Rumii, Taiketsu! Rumi Zu.
‹
›
Home
View web version