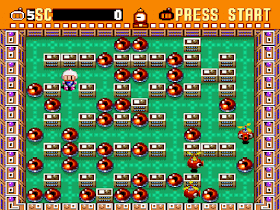 Genre: Action
Perspective: Top-down
Visual: Fixed / flip-screen
Art: Anime / Manga
Gameplay: Arcade, Puzzle elements
Interface: Direct control
Setting: Sci-fi / futuristic
Published by: Hudson Soft Company
Developed by: Hudson Soft Company
Released: 1993
Platform: Super Nintendo (SNES)
We play on one fixed screen, on a field of 13x11 cells, where rows of indestructible columns set our movement strictly vertical and horizontal. We put bombs, retreat and wait for explosions that bring down brick walls, ridding us of opponents, and sometimes (in an unsuccessful scenario) from ourselves - in a word, everything is as usual! And of course, don't forget about drop-down power-ups that speed up our character, allow him to kick bombs, give extra life, and stuff like that. There are also negative power-ups in the form of skulls.
The villains Mr. Karat and Dr. Mukk churn out an army of combat robots and send a fake Bomberman to kidnap the real one in order to master his abilities. Black Bomberman goes against him alone, but loses and loses his castle. After that, Black contacts White; meanwhile, hordes of robots are advancing on the City of the World and two heroes stand shoulder to shoulder to defeat them. This is the plot of the game in Normal Game mode. In this mode, you can play together in Co-op. The whole game consists of 6 worlds with their own characteristics; each world has 8 levels, the last of which has a boss. To pass the level, you need to blow up all the opponents and exit through the door hidden behind one of the destructible walls. The fifth world "Arena" is special; there are no partitions, no exits, and it is a single long battle. There are 4-digit passwords to save progress in the game.
In Battle Mode, 1-4 players can take part at the same time. There are 12 levels, also with their own quirks, and the task of each player is to survive all the others and win all rounds of the level - from one to five. Unlike the story mode, each explosion is lethal immediately, and duels are limited to two minutes. If time runs out or everyone is blown up at the same time, a tie is scored and the round is replayed. After half the time, you get a warning and the field begins to narrow, filling with falling indestructible blocks - from the edges to the center. A bomberman that gets hit by a block immediately becomes spent.
‹
›
Home
View web version