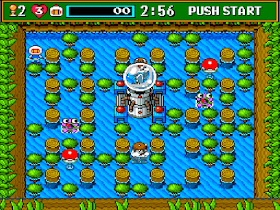 Genre: Action
Perspective: Top-down
Visual: Fixed / flip-screen
Art: Anime / Manga
Gameplay: Arcade, Puzzle elements
Interface: Direct control
Setting: Sci-fi / futuristic
Published by: Hudson Soft Company
Developed by: Hudson Soft Company
Released: 1995
Platform: Super Nintendo (SNES)
Super Bomberman 3 is the next installment in a series of explosive Super Nintendo exclusives. The game made happy with its release only Japan and Europe, bypassing America.
One night, Buggler flew over the junkyard in his flying saucer and saw the bodies of the Insidious Bombardiers, the defeated bosses from the second part, there. He took them and began to bring them back to life! Having found out about this, the White and Black Bombermen again go on the warpath in order to return the Bombardiers to their rightful places. Adding Bagular to them.
The gameplay of the classic Bomberman never changes; we only note that five of us can already fight in multiplayer here. Starting from this part of Super Bomberman, the defeated characters continue to participate in the battle, sliding along the perimeter of the field in minecarts and throwing one bomb at a time, and can easily take someone else to them. In the mini-game here, the winner of the match shoots a penalty, receiving one of six power-ups. Compared to the first two parts, the graphics are simplified and resemble the Bombermen for TurboGrafx-16. The musical accompaniment consists of remixes of tracks from previous games in the series.
‹
›
Home
View web version