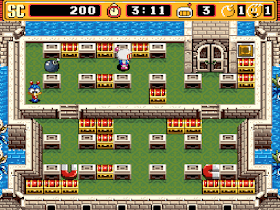 Genre: Action
Perspective: Top-down
Visual: 2D scrolling
Art: Anime / Manga
Gameplay: Arcade, Puzzle elements
Interface: Direct control
Setting: Sci-fi / futuristic
Published by: Hudson Soft Company
Developed by: Hudson Soft Company
Released: 1994
Platform: Super Nintendo (SNES)
Super Bomberman 2 is the only one in the Super Bomberman series where the story mode is entirely solo. In the game, we walk through a kind of labyrinths, clear them of monsters and look for exits to the next levels. Destroying brick walls with bombs, we can find power-ups that give us acceleration, lives and bombs with remote detonation. The single-player consists of five zones, and at the end of each of them we will meet a boss.
Five evil cyborgs set out to take over the world. Bomberman, whom they abducted from Earth, wakes up in some kind of dungeon and begins to look for a way out of it. A long journey will take him to a duel with the final boss, Magnet Bomber, but before that he must defeat his four allies. Rid the planet of the threat... and take care of yourself!
From 1 to 4 players can participate in multiplayer, fighting on 10 levels created specifically for such competitions. Initially, this required a multitap; Today you can play online. There are two modes: all against all and team fights 2 on 2. There is a power-up that is absent in a single passage: a glove that allows you to pick up and throw bombs. The winner of the match can play a mini-game - roulette - to get one of the six power-ups, which will start the next level.
‹
›
Home
View web version