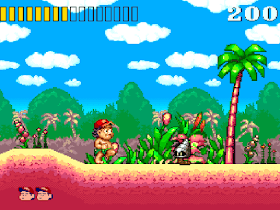 Genre: Action
Perspective: Side view
Visual: 2D scrolling
Gameplay: Arcade, Platform
Published by: Hudson Soft USA
Developed by: Hudson Soft Company
Released: 1992
Platform: Super Nintendo (SNES)
Another game from the Adventure Island series. This time, some evil magician broke into the date, turned Higgins' girlfriend to stone, and fled. Our hero, of course, did not tolerate it and chased after the villain to kick his ass and try to bring his girlfriend back to life. The meaning of the game remains the same - we go to different areas of the island, collect fruits, throw hatchets or boomerangs, ride skateboards. But the game has become less dynamic, the main character has forgotten how to run, and the levels have become simpler, but there are various interesting bosses. The music is good, the graphics are nice.
‹
›
Home
View web version