Shootout at Old Tucson (3DO) 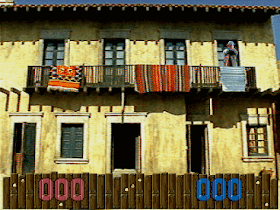 Game control not work at this time.
Genre: Action
Perspective: 1st-person
Gameplay: Arcade, Shooter
Setting: Western
Published by: American Laser Games
Developed by: American Laser Games
Released: 1994
Platform: 3DO Arcade Machine
Shortly before its closure, American Laser Games planned to release another Western-themed virtual shooting range for arcade machines. The game was developed for 3DO hardware and filmed at Old Tucson Studios. The action takes place in the dusty town of the wild west - Tucson, Arizona. As in Mad Dog McCree, Mad Dog II: The Lost Gold, The Last Bounty Hunter, the main task of the player (or players) is to shoot the villains.
One of the reasons for not releasing the game was the 3DO CD drive. It could not withstand many hours of operation of the arcade machine and quickly broke down. Even an attempt to replace it with something more powerful failed.
‹
›
Home
View web version