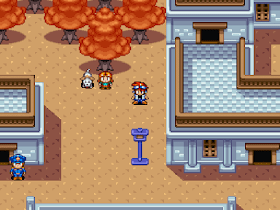 Genre: Action, Role-playing (RPG)
Perspective: Side view, Top-down
Art: Anime / Manga
Setting: Sci-fi / futuristic, Steampunk
Published by: Enix America Corporation
Developed by: Ancient Co., Quintet Co.
Released: 1994
Platform: Super Nintendo (SNES)
The events of the game Robotrek unfold in the fictional world of Quintenix and at the moment when a peaceful and prosperous society is attacked by a criminal group called "The Hackers", led by a certain Blackmore.
Bandits, using mek-monsters, arrange massacres everywhere, participate in robberies, destroying everything in their path. The famous inventor (Doctor Akihabara) from the town of Rococo decides to go on a journey and find out the true plans of the criminals and put them at least some resistance. Apparently, out of concern, he leaves his young son at home - it is he who is the main character of the game.
The boy dreams of following in his father's footsteps and becoming a great inventor - and does everything to make his dream come true. Soon he creates his own robot and also begins to resist the bandits. Later it turns out that this group "The Hackers" is looking for Tetron - a mysterious stone with mystical powers that allows you to look into the past and future, as well as travel through time.
The leader of the organization - Blackmore - seeks to take possession of the fragments of this stone scattered all over the world in order to gain control over time and stand at the head of the entire human civilization ... But will he succeed?

Robotrek is a standard Japanese role-playing game of its period, so it has all the features of this genre. But it stands out in that the main character does not fight enemies on his own, but with the help of combat robots, designed by himself.
Any part of the robot can be customized to your liking: you can choose equipment for them, special attacks, body color, and even a name. Up to three pieces can be in a batch at the same time. Our ingenious protagonist collects them from the created or found spare parts (in this case, the so-called Program Points, which are needed to install programs with abilities, come into play).
The game does not have the concept of random battles - this is similar to Zelda. In case of contact of the character with the opponents moving on the screen, the battle begins. Usually the player goes first, unless the enemy sneaks up on the hero from behind, but in general the order of moves is regulated by a system like ATB (maybe someone does not know - this is a system from Final Fantasy). In general, the order of actions of the participants depends on the speed indicator of each and on the complexity of the commands he executes; the actors get the right to walk in real time after filling the corresponding scale. A character can put up only one of his three robots for battle, and it will take a whole turn to replace it.
As with most role-playing games, there is a standard game experience system. Also, some enemies can leave behind containers with money, or some items or spare parts (if you don’t need them, you can always recycle them into money).
Among the interesting features, one can note the following: for compliance with certain victory conditions, the player will be awarded with additional bonuses (for example, when all opponents are destroyed within the allotted time or when using melee attacks alone, additional containers with prizes appear on the map).
The level of customization is also pleasing to the eye. Success in battles directly depends on the quality of the parts used, so throughout the passage the player must constantly create new types of equipment, combining various materials and spare parts with each other. The production of new parts is carried out in special inventive machines, found from time to time in some locations. The character learns the technology of creating something new from found scientific journals, but not all technologies lend themselves to him immediately - most become available after reaching a certain level. Existing weapons can be upgraded up to nine times by combining them with other weapons of the same type.
‹
›
Home
View web version