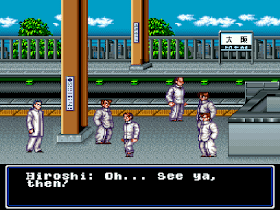 Genre: Role-playing (RPG)
Perspective: Side view
Art: Anime / Manga
Gameplay: Action RPG, Beat 'em up / brawler
Published by: Technos Japan Corp.
Developed by: Technos Japan Corp.
Released: 1992
Platform: Super Nintendo (SNES)
That Technos knows how to create high-quality combat walkers has long been a well-known fact. one of the reasons why she deserved such a calling, I think, can be called her fear of experimentation. In this version of their next creation, Technos has introduced RPG elements. So we got the only Beat-Em-Up in its genre with the most extensive RPG elements. The game provides complete freedom of movement, various equipment, and of course, the blows that the hero receives as he destroys enemies and increases his experience. Unlike River City Girls Zero (Shin Nekketsu Kouha: Kunio-tachi no Banka), our favorite characters from the Nekketsu series got rid of their cartoonishness and introduced themselves in a more realistic form. As a result, we got completely different games on this console. This version is also not without a good storyline and a variety of characters who should be helped by Kunio, a native of the Nekketsu school, who is not afraid to throw his fists and his many tricks in the name of justice.
‹
›
Home
View web version