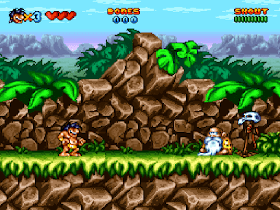 Genre: Action
Perspective: Side view
Visual: 2D scrolling
Gameplay: Platform
Published by: Titus Software Corporation
Developed by: Titus France SA
Released: 1995
Platform: Super Nintendo (SNES)
A game about the adventures of primitive savages. Once, evil dinosaurs stole the entire supply of food from the village of our hero. Now he must find a lot of valuable bones to exchange for food, and along the way, get enough food to keep the village alive. As a reward, he is offered the daughter of the leader and the place of the leader himself after the inevitable departure of the old man to another world. Well, the reward is decent, and our hero goes into battle. He knows how to run like a dog, yell like a frantic, jump high, and besides, he is armed with a club. The game is fun and interesting, recommended to everyone.
‹
›
Home
View web version