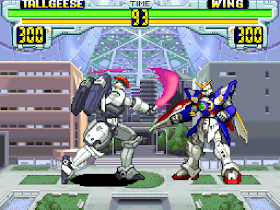 Genre: Action
Perspective: Side view
Visual: 2D scrolling
Gameplay: Arcade, Fighting
Vehicular: Mecha / giant robot
Setting: Sci-fi / futuristic
Published by: Bandai Co.
Developed by: Natsume Co.
Released: 1996
Platform: Super Nintendo (SNES)
This fighting game is implemented in the best traditions of CPS and Neo-Geo arcade systems. The musical accompaniment from Hiroyuki Iwatsuki is again performed without any complaints and emphasizes all the fights simply incomparably. The graphics in the game are implemented at a decent level. All effects look simply impressive. You can’t even imagine how you could get it for just an unfortunate megabyte! Your characters, who control giant robots, use everything they can to emerge victorious in every fight. Different options for using the block, using weapons up close and at a distance make the combat action incredibly intense. All sorts of strikes and special moves flow into simply devastating attacks. Each mechanized vehicle has its own combat potential, upon activation of which the opponent gets serious damage. Recommended to all fans of worthy fighting games and giant robots.
‹
›
Home
View web version