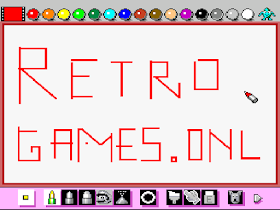 Genre: Educational
Educational: Graphics / art, Music
Published by: Nintendo of America Inc.
Developed by: Nintendo Co.
Released: 1992
Platform: Super Nintendo (SNES)
In addition to being a basic drawing program, Mario Paint allows the player to create custom stamps pixel by pixel and simple animations. Player-created animations can only be viewed on a TV screen.
In addition, the game includes 60 different textures and patterns, 75 types of stamps, 15 customizable stamps and 9 different special transition effects between scenes when erasing.
Mario Paint contains a fast-paced action minigame whose goal is to swat flies, Gnat Attack, which benefits greatly from the SNES Mouse. The player controls a gloved hand (similar to the one seen in the title screen), which must crush flying insects with a fly swatter, before being stung. There are three levels, each with 100 bugs and a boss. After defeating the final boss, the minigame restarts from the first level and adds a small icon to the top left of the screen.
An easter egg is featured on the Mario Paint title screen. The player can click on any letter of the title to cause effects. Some letters change the music, make a Yoshi run across the screen, make Mario grow and shrink, and so on.
‹
›
Home
View web version