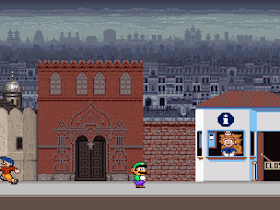 Genre: Educational
Perspective: Side view
Educational: Geography
Published by: Software Toolworks
Developed by: Software Toolworks
Released: 1992
Platform: Super Nintendo (SNES)
A game based on the Mario series published by a third party. Now, with the help of Yoshi and Luigi, you have to defeat the villain Bowser in order to save Mario. Many stages (two and a half dozen), a lot of typical for a series of enemies and hidden stages. Luigi travels to various real cities, talking to their inhabitants and learning about famous landmarks. Good educational game.
‹
›
Home
View web version