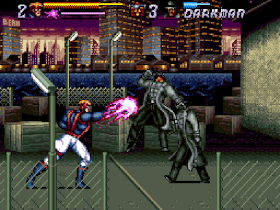 Genre: Action
Perspective: Side view
Visual: 2D scrolling
Gameplay: Beat 'em up / brawler
Setting: Sci-fi / futuristic
Published by: Playmates Interactive Entertainment
Developed by: Beam Software Pty.
Released: 1995
Platform: Super Nintendo (SNES)
Quite a very good Beat-Em-Up. Despite the extensive secret organization of the Wild Cats, only three heroes will be allowed to play, the rest will simply conduct a dialogue with them. Each character has its own characteristics and unique skills. One has a blaster in his arsenal and knows how to fly, the other turns his limbs into a stabbing weapon, thanks to which he can climb walls, the third is tall and strives to scatter numerous enemies in the corners. Therefore, each hero performs his task in a location strictly assigned to him. Infiltrate, investigate, destroy and destroy the plans of the insidious villain, that's what is required of you. The set of skills for each hero is standard and does not stand out in any way, each has its own combo, superhero skill, there is a limited bombs button, and a separate button to capture enemies, it is pleasant and interesting to play. The music is in very good quality, the graphics of the game are also pleasing to the eye.
‹
›
Home
View web version