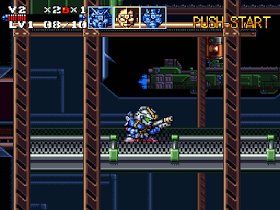 Genre: Action
Perspective: Side view
Visual: 2D scrolling
Gameplay: Arcade, Platform, Shooter
Setting: Sci-Fi / Futuristic
Published by: Banpresto
Developed by: Sun L
Released: 1994
Platform: Super Nintendo (SNES)
Let's put an end to the evil ambitions of General Black X in this great battle! The fourth part of the series is notable for quite good special effects and interesting gameplay. You can alternate between four characters using their weapons and unique skills. Most importantly, this game can be played by two players at once. It can be said that everything in this part is implemented very worthily. It is interesting and pleasant to play.
‹
›
Home
View web version