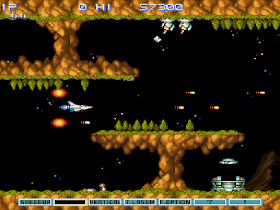 Genre: Action
Perspective: Side view
Visual: 2D scrolling
Gameplay: Arcade, Shooter
Setting: Sci-fi / futuristic
Published by: Konami
Developed by: Konami Industry Co.
Released: 1991
Platform: Super Nintendo (SNES)
An exciting flying shooter for 1-2 players. Before the start of the game, choose the type of weapon and protection that you are going to use, and go into battle. The rest of the game is made in the style characteristic of the genre: an abundance of opponents, upgrades in place of blown up ships, numerous bosses during the game.
‹
›
Home
View web version