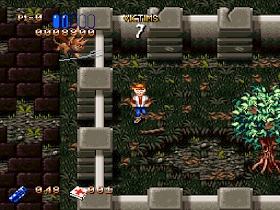 Genre: Action
Perspective: Diagonal-down
Visual: 2D scrolling
Gameplay: Shooter
Interface: Direct control
Narrative: Horror
Published by: JVC Musical Industries
Developed by: LucasArts Entertainment Company LLC, Motion Pixel
Released: 1992
Platform: Super Nintendo (SNES)
A Super Nintendo exclusive that continues the adventures of the legendary and beloved teenage couple, Zeke and Julie, who fight monsters for the lives of all their neighbors. Two players can play at once, which adds to the fun in this work. Each of them can use a variety of weapons, as well as all kinds of means, so as not to be taken by surprise by the monsters. Again it is necessary to save the neighbors who hoped only for you. Heroes need to come out victorious from the mess in which they lured themselves. Super Nintendo once again offers great gameplay, this time not by Konami, but by LucasArts. Very interesting stages, where they will even let you go to hell. This game continues the tradition of the first game perfectly and is a little-known hit of this console, so don't miss the opportunity to play this sequel, presented exclusively for the Super Nintendo console.
‹
›
Home
View web version