The Eye of Typhoon (3DO) 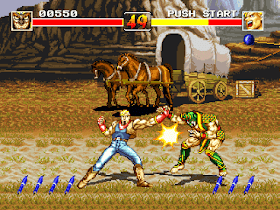 Genre: Action
Perspective: Side view
Gameplay: Fighting
Published by: LG Software
Developed by: Viccom
Released: 1996
Platform: 3DO Interactive Multiplayer
The Eye of Typhoon is a rather interesting fighting game done in a rather traditional style. The game also features intro videos, just like the 3DO fighting game Bishoujo Senshi Sailor Moon S. The game is executed beautifully, a sufficient amount of animation, the use of various interesting effects, including scaling. Choose from 12 characters, each with their own special moves and abilities.
Once upon a time there was a mysterious martial art - Kuk-Cho-Ho-Kwon which was inherited from the Myoung Dynasty. But over time, they forgot about it, and it disappeared, leaving behind only legends. Many years later, Asian countries such as China and Korea are in a state of chaos. After learning about the secrets of Kuk-Cho-Ho-Kwon, the powerful Western countries are desperately trying to resurrect him. Many innocent fighters were destroyed, and now the secret book of Kuk-Cho-Ho-Kwon has begun to reveal its secrets. Will Kuk-Cho-Ho-Kwon be revived? By whom...? The answer to this question you have to give passing the game.
‹
›
Home
View web version