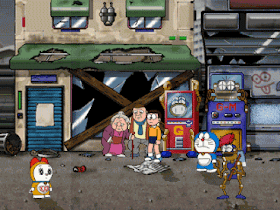 Genre: Action, Adventure
Perspective: Side view
Visual: 2D scrolling
Art: Anime / Manga
Pacing: Turn-based
Gameplay: Fighting, Graphic adventure
Interface: Direct control
Setting: Fantasy, Sci-fi / futuristic, Western
Narrative: Comedy
Published by: Shogakukan Inc.
Developed by: Riverhillsoft Inc.
Released: 1995
Platform: 3DO Interactive Multiplayer
An exciting 3DO Doraemon Yuujou Densetsu game based on the popular manga and anime of the same name “Doraemon” about a blue robot cat who arrived from the future of the 22nd century to help a schoolboy named Nobita Nobi. This is an exciting adventure with a touch of quest. In which we have to travel through time and other worlds together with the heroes. Collect items, communicate with people and complete various tasks. There will be something like fights and mini-games. Very beautiful, long and exciting game. It's a pity, only in Japanese, which prevents you from finally and completely immersing yourself in the pleasant atmosphere of the game.
‹
›
Home
View web version