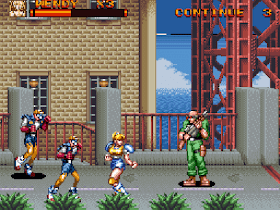 Genre: Action
Perspective: Side view
Visual: 2D scrolling
Gameplay: Beat 'em up / brawler
Published by: Jaleco USA
Developed by: Jaleco Ltd.
Released: 1993
Platform: Super Nintendo (SNES)
The continuation of the game Rushing Beat (Rival Turf!) turned out to be of better quality. Now there are 5 characters in the game: a blond judoka, a green ninja, a paratrooper, a man in a red uniform similar to M.Bison and a blonde wrestler girl (strong character). First, we select 2 heroes, the rest will be kidnapped and we will gradually save them. There is an opportunity to run and beat with a run. Enemies are quite fast and thick. The real highlight of the game is Ikari Mode. When a character receives a certain level of damage in a short time, he enters a mode in which he himself does not receive damage, and inflicts attacks with increased damage on opponents. A beautifully designed game.
‹
›
Home
View web version