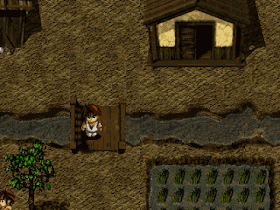 Genre: Role-playing (RPG)
Perspective: Top-down
Visual: Isometric
Art: Anime / Manga
Pacing: Turn-based
Setting: Fantasy
Published by: Panasonic Software Company
Developed by: Right Stuff Corp.
Released: 1996
Platform: 3DO Interactive Multiplayer
Dark forces threaten the world. Evil is spreading across the earth. It's not too late, but what can be done? Two heroes hurry from different parts of the empire - Wallace and Rakujitto. None of them knows what lies ahead, but what will happen will change their lives forever.
Blue Forest Story - Seal of Wind is a unique RPG. The quality of performance is amazing - classic gameplay combined with great graphics, a fantastic soundtrack and inner charm. Since only Guardian War and Lucienne's Quest are well-known RPGs for 3DO, Blue Forest Stories come in very handy.
By choosing a guy or a girl, you start one of two possible stories. The plot is only linear in the first chapter. In the future, you will influence your own destiny by choosing who to hang out with and who not. Despite the fact that the game is two-dimensional, the surrounding world is drawn so well that you feel immersed in the game world. Each character is drawn with love, colorful and bright. When changing clothes, this is also noticeable on the characters, because they are quite large. Even weapons and clothing wear out over time.
‹
›
Home
View web version