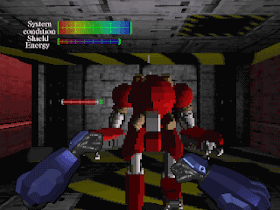 Genre: Action, Adventure
Perspective: 1st-person
Gameplay: Graphic adventure
Interface: Direct control, Point and select
Vehicular: Mecha / giant robot
Setting: Japan (Modern / Futuristic), Sci-fi / futuristic
Published by: Human Entertainment
Developed by: Human Entertainment
Released: 1994
Platform: 3DO Interactive Multiplayer
This is an excellent mixture in one game of several genres of 3D graphic adventure, shooter and even partially fighting game. The action takes place in the distant future around the year 2134. In connection with the catastrophe, people began to live underground, and robots and various high technologies became their faithful companions and helpers, but at the same time, the game will not do without mysticism. You also have to play the role of a fighter for justice with a code-9999 mega suit. The game will explore the environment and collect various items. Fight and shoot, as well as wander through the labyrinths. All this is accompanied by a large number of different dialogues and plot inserts, it's really a pity that in Japanese. Despite all this, the game can easily drag out to the bitter end. Since everything in the game is intuitively simple, and most importantly, the music and graphics are at a very high level.
‹
›
Home
View web version