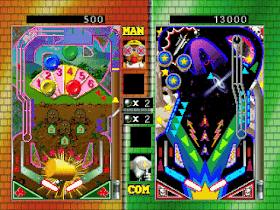 Genre: Action
Perspective: Top-down
Gameplay: Pinball
Published by: Matsushita Electric Industrial Co.
Developed by: Japan DataWorks Inc.
Released: 1994
Platform: 3DO Interactive Multiplayer
The Battle Pinball game is a very unusual Japanese-style interpretation of Pinball. As the game progresses, we are told the story of 4 creatures: the Builder Mole, the Japanese samurai boy, death with a scythe that got up from the grave, and an alien from another planet. They all gathered for a pinball tournament. The tournament will take place in a rather unusual form, as well as the battle against each other in Tetris or similar logic games. If you manage to win, you will be able to see a video about the character you are playing. What is remarkable is the fight takes place in unequal conditions. Pinball tables are different for everyone and do not look alike.
‹
›
Home
View web version