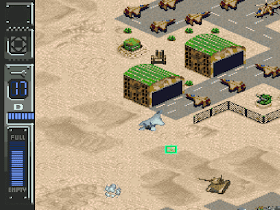 Genre: Action
Visual: Isometric
Gameplay: Shooter
Vehicular: Flight / aviation
Published by: SETA U.S.A.
Developed by: Opus Corp.
Released: 1995
Platform: Super Nintendo (SNES)
We all know the Strike series on 16 Bit. Such as Desert Strike, Jungle Strike, Urban Strike. They had a lot of fans and I recommend them to play this exclusive implementation on the Super Nintendo. You, as a member of the armed forces of the UN Corporation, help the peoples to fight the occupying army. You will have to fly on planes with a pronounced difference between them. They complement each other perfectly. And after several sorties, you must carry out all the plans of your command. The campaign is divided into 8 missions, and each of them must be completed in a limited number of sorties. Destroy radars, blow up an oil pipeline, demolish chemical plants, and wipe all military bases from the world map. Also, you destroy an insane amount of enemy equipment, all sorts of anti-aircraft installations, etc. An interactive tactical map with detailed descriptions of the reconnaissance of all objects can very well help you complete all the tasks. After each flight, your performance is evaluated on such items as efficiency, accuracy, speed. All this also affects the process of the game. The more you delve into it, the more you admire all sorts of subtleties of developers. Very informative sound effects of negotiations, explosions and confrontation. Great music will also accompany you. This is a very good example of skillful programming. The mechanics of the game is striking in its sophistication.
‹
›
Home
View web version