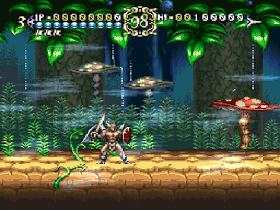 Genre: Action
Perspective: Side view
Visual: 2D scrolling
Gameplay: Platform
Setting: Fantasy
Published by: Enix America Corporation
Developed by: Quintet Co.
Released: 1993
Platform: Super Nintendo (SNES)
Continuation of the cult game from Enix. In this part, the developers completely bypassed the urban simulation mode that was present in the first part, leaving only the action genre here. However, from this the second game has not lost the status of a masterpiece, which its predecessor won. Many consider it even a prequel and a kind of backstory to the first game. But, one way or another, the sequel also remained a cult game and an incomparable Super Nintendo hit. You again have to play the role of a deity that lives in a large palace floating in the sky. With the help of the palace, you move around the map and check the people below. After listening to their plight, you, as a deity and a very powerful being, descend into the lower world to fight monsters and rid the world of evil. Compared to the first part, the mode of action here is much better developed. At the disposal of the character are wings, a sword and a variety of magical attacks. Graphically, the game is executed superbly, and each time visiting locations that are decorated at a very high level is extremely exciting. If you still want to play the role of a deity, but you did not understand the city-building mode from the first part, then play this game. The continuation is worthy of its predecessor, many may like it even more, as it is performed at the highest level.
‹
›
Home
View web version