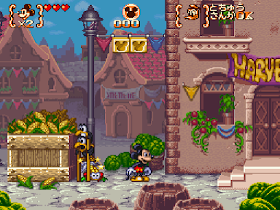 Genre: Action
Perspective: Side view
Visual: 2D scrolling
Gameplay: Platform
Published by: Capcom Co.
Developed by: Capcom Co.
Released: 1995
Platform: Super Nintendo (SNES)
In the last part of the series, Mickey Mouse and Donald Duck try to save Donald's nephews, who were kidnapped by the restless Pete.
The game differs from the previous one in that characters dressed in costumes of the same theme have different abilities. There are 4 outfits in total: standard, knightly, stylized as Robin Hood and magical. On the levels, you can find a secret door leading to a bonus card game. You can also visit the special shop again.
‹
›
Home
View web version