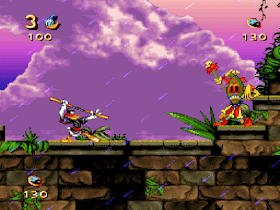 Genre: Action
Perspective: Side view
Visual: 2D scrolling
Gameplay: Platform
Narrative: Martial arts
Published by: Disney Interactive
Developed by: Disney Interactive
Released: 1996
Platform: Super Nintendo (SNES)
Colorful game with cartoonish graphics and excellent musical accompaniment.
Donald Duck under the alias of Maui Mallard investigates the theft of the Shabuhm Shabuhm idol on a tropical island. He has bug-shooting weapons in his arsenal that can be combined into more powerful ammo. From the second level, Donald will be able to turn into a Cold Shadow ninja, rush like the wind, attack enemies with a pole, use it to get to secret places.
‹
›
Home
View web version