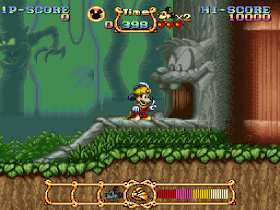 Genre: Action
Perspective: Side view
Visual: 2D scrolling
Gameplay: Platform
Setting: Fantasy
Published by: Capcom U.S.A.
Developed by: Capcom Co.
Released: 1992
Platform: Super Nintendo (SNES)
Pete has kidnapped Pluto and is keeping him in his castle, guarded by the most incredible creatures. Mickey Mouse has to save his dog.
The main feature of this platformer is the ability to change Mickey's outfit, which comes with new abilities. At the beginning of the game, Mickey is dressed in his traditional costume and can only pick up items and throw them at enemies. In the second level, you can try on a wizard's outfit and use magic. To replenish the level of magic, you need to collect magic lamps. Wizard Mickey can also breathe underwater and fly on a magic carpet. In the third level, the mouse is waiting for the form of a firefighter. With it, he can put out fires and move obstacles with the pressure of water from a hose. Water can also wash off enemies and make icicles. To replenish the water level, you need to refuel at fire hydrants. In the fourth level, Mickey will become a rock climber. Here he can wield a rope with a hook.
At the end of each level, Mickey has a boss fight. You can also visit a special shop and improve your equipment.
‹
›
Home
View web version