Grand Chef of the Kingdom (3DO) 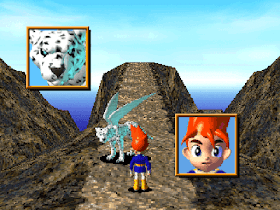 Genre: Role-playing (RPG)
Perspective: Behind view
Art: Full Motion Video (FMV), Live action
Gameplay: Japanese-style RPG (JRPG)
Setting: Fantasy
Published by: Sala International
Developed by: Sala International
Released: 1996
Platform: 3DO Interactive Multiplayer
The game has a rather unusual plot. It's kind of a mixture of cooking recipes and RPGs. Actually, most of the time we will be looking for various ingredients and recipes. You play as a red-haired boy named Falmouth, he is a cook's assistant. By the will of fate, he will have to go to the fabulous kingdom of Guranshefu. In this kingdom, the issue of food is treated in a special way. First, you have to join the Hattori School of Nutrition, where Yuki Hattor will be your mentor. A very funny role-playing game, only it's in Japanese.
‹
›
Home
View web version