Ghost Hunter Series: The Mask of Black Death (3DO) 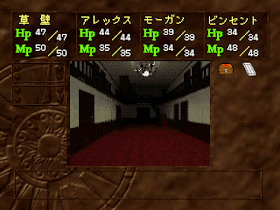 Genre: Adventure
Perspective: 1st-person
Narrative: Horror
Published by: Matsushita Electric Industrial
Developed by: Humming Bird Soft
Released: 1994
Platform: 3DO Interactive Multiplayer
The background of the game is as follows: 30 years ago, on the outskirts of foggy London, there was a mansion in which a terrible murder took place. The owner of the house Owen Kilford, his wife and child invited three people to the house, and all were killed in one night. Soon, Owen himself left a suicide note and hanged himself. The case was closed, the mansion was empty and forgotten about, though not for long. Rumors soon spread of ghosts haunting the building. Of course, for 30 years, curious people have been found, but none of them have solved the riddle of the appearance of ghosts. Some began to band together to challenge the mystery of the mansion. They began to be called Ghost Hunters, ghost hunters.
So, before us is the next horror movie for 3DO, something between D and Escape From Monster Manor. A team of four: Kusakabe, Alex, Morgan, and Vincent enter the mansion. The action takes place in a first-person perspective, in a small window in the middle of the screen. 3D rendered mansion in FMV, so the freedom of movement is limited, you can't even step back, you have to walk "in steps"! Thunder rolls are what impressed and scared me the most in this game. Fights with ghosts are not animated at all, and without knowledge of the Japanese language, there is nothing to look for here.
‹
›
Home
View web version