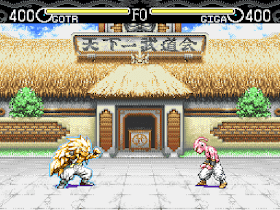 Genre: Action
Perspective: Side view
Visual: 2D scrolling
Art: Anime / Manga
Gameplay: Arcade, Fighting
Published by: Bandai Co.
Developed by: Tose Co.
Released: 1996
Platform: Super Nintendo (SNES)
Continuation of the fighting game in the universe of the popular anime. We can safely say one of the best parts of Dragon Ball Z, and maybe even the best. Graphics and sound are implemented at a fairly high level. You can play the story mode or just compete with the computer or a second player. The combat is very well done. Each button is responsible for its movement and type of attack. The game has just the most powerful combinations and bundles, so that the entire combat system looks at a decent quality of performance. In addition to throwing all sorts of fireballs, the heroes simply use powerful attacks, you can launch the heroes into all kinds of locations: into the air, from the air back to the ground, to another area, etc. In general, the action looks good. Each character can restore their strength and health during the fight. There are all the essential innovations of the series, which have become much better somewhere. A very worthy implementation. Recommended to all fans of this anime and good representatives of the genre.
‹
›
Home
View web version