The Adventures of Rocky and Bullwinkle and Friends (SNES) 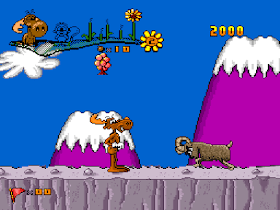 Genre: Action
Perspective: Side view
Visual: 2D scrolling
Gameplay: Platform
Published by: THQ Inc.
Developed by: Absolute Entertainment
Released: 1993
Platforms: Super Nintendo (SNES), SEGA Genesis / Mega Drive
A colorful platformer about famous cartoon characters - Bullwinkle, a moose, and Rocky, a flying squirrel. Their eternal opponents Boris and Natasha steal valuable exhibits from the museum and the task of the heroes is to return them back. In the course of passing between the characters, it is possible to switch on the go, because each has unique skills. So a squirrel can fly short distances, and an moose throws bombs.
‹
›
Home
View web version