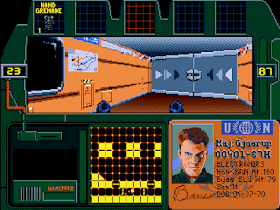 Genre: Action, FPS
Perspective: 1st-person
Gameplay: Shooter
Interface: Direct control
Setting: Sci-fi / futuristic
Published by: SLG, QUByte
Developed by: Piko Interactive
Released: 2022
Platform: SEGA Genesis / Mega Drive
Zero Tolerance Underground is an unreleased sequel that was originally intended to be released for Sega CD and/or 32X. The game was almost completely finished, but unfortunately it was never released and thus forever lost in the sands of time... until PIKO took over the rights and restored the missing pieces! Thanks to the QUByte porting, it has now turned into a fully functional FPS.
At the beginning of the game, we get into the subway. Increased the speed of the game, now the game has become more dynamic. Changed Control for 6-button gamepad, there is a choice between Classic and 6-button control. In the game we are waiting for new musical accompaniment for locations.
‹
›
Home
View web version