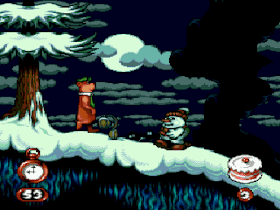 Genre: Action
Perspective: Side view
Visual: 2D scrolling
Gameplay: Platform
Published by: Empire Interactive Entertainment
Developed by: Blue Turtle
Released: 1994
Platform: SEGA Genesis / Mega Drive
A funny game based on the popular cartoon. You have to play as Yogi Bear. He must prevent the construction of a chemical plant at his residence in Jellystone National Park. You have to visit different levels and see various creatures, including walking snowmen. Collect clocks and picnic baskets. You can remove the enemy, as in most standard platformers, by simply jumping on him. The game has beautiful cartoon graphics and nice animation.
In Europe, the game is known as Yogi Bear Cartoon Capers.
In the US Adventures of Yogi Bear.
‹
›
Home
View web version