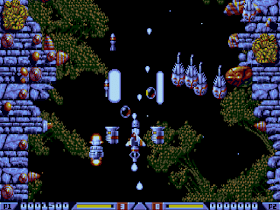 Genre: Action
Perspective: Top-down
Gameplay: Arcade, Shooter
Vehicular: Space flight
Setting: Sci-fi / futuristic
Published by: Virgin Games
Developed by: Bitmap Brothers
Released: 1990
Platform: SEGA Genesis / Mega Drive
After the defeat of the Xenites in the galactic conflicts (Galactic Conflict) that were in the first Xenon. They returned with a plan of destruction. Four bombs in the space-time region have been planted. The Megablast pilot will have to fend off old acquaintances. He also has to destroy four large monsters (animals) which are connected with bombs. After their death, the bombs will be defused.
The spacecraft is improving and getting bigger and bigger. The weapon becomes more powerful and starts shooting in different directions.
‹
›
Home
View web version