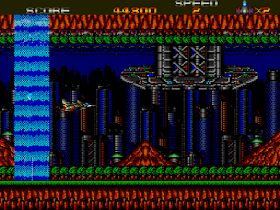 Genre: Action
Perspective: Side view
Visual: 2D scrolling
Gameplay: Shooter
Interface: Direct control
Vehicular: Flight / aviation
Setting: Sci-fi / futuristic
Published by: Unipacc
Developed by: Affect Co., Unipacc
Released: 1990
Platform: SEGA Genesis / Mega Drive
The planet Sephiroth is home to many thriving societies. For many years they lived in peace. But the ancient evil has returned. Long ago, the warmonger known as the Guardia was banished from the planet, but now he has returned, not by himself, but with an entire star army. Soon the Guardia Military invaded the planet Sephiroth and unleashed their power on the defensive military equipment. Soon a fighter was developed more powerful than the entire Guardia Guard. The fighter was developed based on technologies unknown to Guardia. It was called XDR: X-Dazedly Ray.
The player controls the ship and must guide it through six challenging levels, destroying various enemy ground and air forces. The ship is equipped with three types of weapons. All weapons can be improved by collecting various bonuses that drop from certain enemies. It is also possible to pick up a temporary shield or life. At the end of each level, you will encounter a boss. Now the fate of Sephiroth is in your hands.
‹
›
Home
View web version