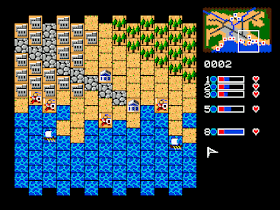 Genre: Strategy
Perspective: Top-down
Pacing: Real-time
Setting: Classical antiquity
Published by: Micronet Co.
Developed by: Micronet Co.
Released: 1991
Platform: SEGA Genesis / Mega Drive
Despite the fact that the graphic side of the game is not very attractive, the strategic side of the game is very well done. You control the Roman army. And we must lead them to victory. You have four cards at your disposal, mainly in Europe. The player can control each unit of troops on a separate part of the map. There are six different options for each troop to choose from, including advance and retreat, recuperation, or building traps. After you start the battle, a new battle screen will appear. Where you can choose the placement of troops and tactics.
‹
›
Home
View web version