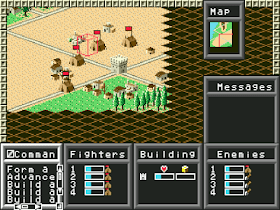 Genre: Strategy
Perspective: Diagonal-down
Visual: Isometric
Pacing: Real-time
Gameplay: Real-time strategy
Interface: Point and select
Setting: Africa, Asia, Classical antiquity, Europe
Published by: Micronet Co.
Developed by: Micronet Co.
Released: 1992
Platform: SEGA Genesis / Mega Drive
Continuing to tell the story of the conquests of Julius Caesar, the second part of the game will offer to begin with the suppression of the uprising in Asia.
Having tried to replay the events of distant days, it is possible to deploy hostilities and try to succeed in conquests in the territories of ancient Persia, Egypt, Arabia.
You can also raise sails and go to conquer the expanses of the Mediterranean Sea in search of new lands for the development and expansion of a powerful empire.
In the game, not only military maneuvers and caring for the army are possible, but it allows you to develop the city by building up the available territory with buildings that can not only raise morale, but also have a positive effect on the attitude of ordinary citizens towards their leader.

Interestingly designed Sound Test - march of soldiers to the music.

In the game, each soldier on the battlefield symbolizes an entire army. Soldiers move around the map in only four directions - up, down, right, left. Thus, the attack can either be on the forehead, or as an aid to another army (attack on the enemy from the left or right). All skills of each army are shown in the "Status" icon:
Soldiers may change in appearance - armor may appear, or they will ride a horse. This shows their skills.
It is also possible to command an army. The selected command should be flashing, thus indicating that this particular command is being applied.

It is possible to follow the movements of the enemy, and even ... Find out what he is going to do - for this there is the "Enemies" icon:
If there is a castle or colosseum icon nearby, then he is trying to get there.
This way you can see your soldiers in the "Fighters" icon
There is also a "Buildings" icon. This icon shows what buildings you have and what condition they are in...
About the "Map" icon, I think there is no need to explain ... (Map)
"Messages" are messages, if you know English of course...