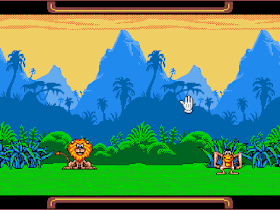 Genre: Educational, Simulation
Perspective: Side view
Educational: Graphics / art, Music
Published by: SEGA of America
Developed by: HeadGames
Released: 1994
Platform: SEGA Genesis / Mega Drive
This game or even more program is primarily intended for children. Although someone does not forbid you to play it. Wacky Worlds is considered a continuation of the previously released program with similar features Art Alive. This game is also part of the Sonic the Hedgehog series of games. Although it also has the heroes of the games Ecco the Dolphin, ToeJam, Earl. Now a little about the program itself. It provides six themed backgrounds on which you need to overlay various sprites (stickers). Some of the sprites are animated. Also, some objects can be painted. You can edit the music by moving different pictures and clicking different objects (buttons). In a word, the program allows you to create your own cartoon.
‹
›
Home
View web version