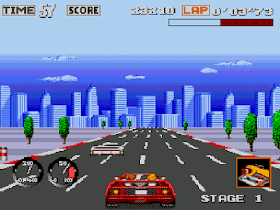 Genre: Racing / Driving
Perspective: Behind view
Gameplay: Arcade
Vehicular: Automobile, Street racing
Published by: SEGA Enterprises Ltd.
Developed by: AM R&D Dept. #2
Released: 1992
Platform: SEGA Genesis / Mega Drive
In the game, we get the legendary Ferrari F40, we need to overtake an opponent who will be driving the no less legendary Porsche 959. The race takes place in the United States, starts in New York and ends in Los Angeles.
After passing 4 segments, you can choose one of the improvements for your car:
At each of the stages it is not so important to overtake the opponent as to meet the time. However, a rather windy girl is traveling with us, who will change into the opponent's car if he passes a section of the track faster than us. According to the same scheme, she can transfer back to us.
The main thing is to come first on the last section of the track.
‹
›
Home
View web version