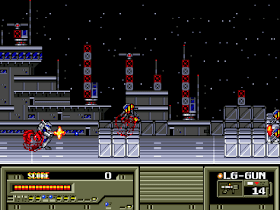 Genre: Action
Perspective: Side view
Gameplay: Shooter
Vehicular: Mecha / giant robot
Setting: Sci-fi / futuristic
Published by: DreamWorks
Developed by: NCS Corporation
Released: 1990
Platform: SEGA Genesis / Mega Drive
Target Earth (Assault Suits Leynos) is the first game in the Assault Suits series of games. By 2201, developing technologies made it possible for a person to live anywhere in the universe. The game is tied to the war between the Earth and its colonies, which came from the depths of space. The Earth Defense League undertakes to defend the Earth. Among the defensive vehicles is a twelve-foot-tall Armored Combat Robot with amazing combat performance. You are Rex the commander of a combat robot. The first battle takes place in Ganymede, after which the battle is transferred to space. There are also battles to come on the ground and in the lair of the enemy.
The game has eight levels. As you progress through the game, you need to improve weapons and armor.
‹
›
Home
View web version