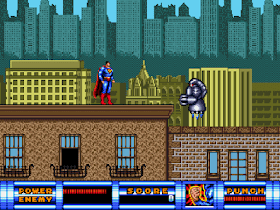 Genre: Action
Perspective: Side view
Visual: 2D scrolling
Gameplay: Platform
Setting: Sci-fi / futuristic
Published by: Sun Corporation of America
Developed by: Sun Electronics Corp.
Released: 1992
Platform: SEGA Genesis / Mega Drive
The game is based on the popular DC superhero comics of the same name. In the game you have to play for Clark Kent, he is just Superman. He will have to fight against many super villains including Prankster, Metallo and Mr. Mxyzptl to eventually defeat evil and fight the main supervillain Brainiac. Each level starts with the front page of the Daily Planet newspaper. Announcing the crimes of supervillains. It's a shame that SuperMan doesn't have many different moves in the game. He can punch or kick, and there is also a super punch. As the game progresses, you can collect various bonuses. At the end of the level, we will fight one of the leaders (bosses), a super villain from a comic book. And we will see congratulations from the Daily Planet. In the last level, Superman will have to visit Brainiac's spaceship, fight again with all the previous bosses, which is quite common in games, and finally with Brainiac himself.
‹
›
Home
View web version