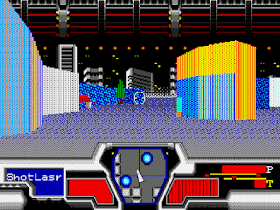 Genre: Action
Perspective: 1st-person
Gameplay: Shooter
Vehicular: Space flight
Setting: Sci-fi / futuristic
Published by: Masaya
Developed by: Arsys Software
Released: 1990
Platform: SEGA Genesis / Mega Drive
The game is completely made in polygonal 3D, and was much ahead of its time. Open spaces of space, cities, etc. All graphics in the game are fully 3D. The game also has a lot of dialogues designed in anime styles. And also there are animated 3D videos made on the game engine. In the 25th century, the intergalactic wars that began when the Earthlings made first contact with the aliens ended with Central Earth - they ended up victorious. 200 years have passed. Now in the 27th century, the remnants of the Earth Federation are known as the Federation Patrol. They maintain a delicate balance of power with VOID. The people, under the control of the military, demand the deportation of the Aliens. VOID is plotting massive war-mongering attacks across the galaxy. On Jupiter's moon Ganymede, a small battalion will be drawn into this conflict and prepare to fight back against VOID. At the beginning of the story, we are introduced to the main character Brian, he is in the Starship simulator. Built by his friend Gibson and his droid Freddy. Then they went to a cafe where they learned some information about VOID, where Brian was asked to lead the "kamikaze attack" squad.
‹
›
Home
View web version