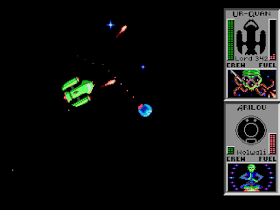 Genre: Action, Strategy
Gameplay: Shooter
Vehicular: Space flight
Setting: Sci-fi / futuristic
Published by: Ballistic
Developed by: Toys for Bob Inc.
Released: 1991
Platform: SEGA Genesis / Mega Drive
This is one of the few games ported from the IBM PC to the Sega Genesis. Lose a couple of minutes and read what this game is (if anyone does not know it).
The plot of the game is as follows: Earth and the alliance she created are at war with a wild alien race known as the Ur-Quan.
You can immediately rush into battle by choosing one of the opposing sides. I note that each side has in its flotilla all kinds of ships with all kinds of characteristics (speed, striking ability, maneuverability, protection level, energy level, and much, much more). The ships fight one on one and it is very important to choose the right ship for the battle, otherwise you will be destroyed.
The weapons and abilities of the ships in the game are so outlandish that the Russian language may not be enough to describe them. They must be seen.
The second version of the game is to start a real war. Here the game looks like a strategy. You conquer planets, build colonies, mine minerals and increase your space fleet.
Oh, I remember I started playing this game back on the PC, CGA monitor (4 colors), I remember that I waited for a minute to load the next ship from a floppy disk, but even on this primitive platform the games are simply charming. On Sega, Star Control has found a new sound, full-color graphics, and most importantly - speed. Now all ships really fly, not swim!
Good luck to everyone, and don't miss this game, it's a hit of all time!
‹
›
Home
View web version